It's been a long time coming, but we're finally here. The new stable: ME3Explorer v2.0. Thanks for sticking with us; we know 21 months is a long, long time to wait for an update, and appreciate your patience.

ME3Explorer v2.0 represents a new era in development of the toolset:

Now that we've all caught up a bit, let's take a brief look at how the toolset has changed from the last stable, revision 653/109w, to the current stable, ME3Explorer v2.0.

The v2.0 GUI has undergone a significant amount of refinement as part of the process of writing the wiki. Menus have been re-structured, deprecated tools removed, new tools created, and some much-needed "window-dressing" added. Most tool articles on the wiki have been updated to reflect these changes; a few are still in process. Over the next 1-2 weeks we'll be coming up with a visual indicator that will help readers better discern the difference.

There are four key changes in this department: background, versioning, icons, and taskbar.

The main menu itself will look very familiar, but has been re-structured for neatness and clarity. The contents for each dropdown are now alphabetized, and similar tools are grouped together by function:

Almost all existing tools have seen some type of change since the last stable. A full changelog would be extremely tedious at this point (and also unnecessary since many users had already been using newer versions of the tools) so for the most part we suggest you just open the toolset and take a look. A few things are less straight-forward, so those we'll cover below. We'll also included a brief explanation of any new tools that have no existing counterpart in the old stable.

More details about all User Tools and a few Developer Tools can be found in their relevant tool article.

As you'd expect, there's been a moderate amount of flux as to what tools are still part of the toolest after almost two years. Below is a list of tools that have been renamed, added, or removed due to deprecation/low usage.

Note: Tools in italics were added after rev653.

With the changes above, all console-related tools have been removed from the toolset. We are now solely PC-focused. Users who are interested in flexibility and modding their games should be playing on PC; consoles are specifically made for simplicity, which is what contributes to their rigidity.

Editing functionalities have been removed from Asset Explorer. This is a highly-deprecated Developer Tool, with a GUI is much more user-friendly than the PCCEditor2. This can be helpful for less-technical players who are dipping their toes in the modding pool for the first time.

AutoTOC is a fantastic tool that generates new PCConsoleTOC.bin files -- something necessary for all DLC mods to function. It now has a "Generate All TOCs" feature that will create new TOCs for the base game and any DLC installed with a single click. It also replaces both, old TOC Editors for TOC updating functionalities, and any tool that used to call on those tools for TOCing should now call AutoTOC, instead. TOCing inside other tools is now restricted to DLC Editor 2, ModMaker, Texplorer, and TPF Tools.

Created by Warrantyvoider, this tool is a precursor to the more advanced Interp Viewer. It uses a simple tree structure to depict Interpdatas and their child matinee exports inside a PCC. 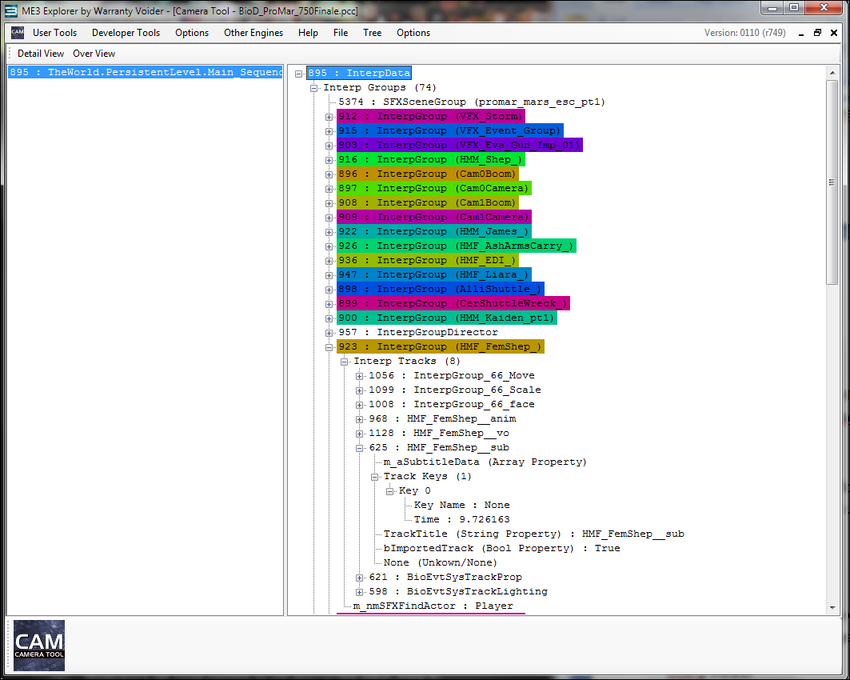 These remain in the toolset for now, but will be overhauled in the future. It's best not to use them in their current state, and to instead use Wenchy or TankMaster's Coalesced Editor.

Image Engine, by Kfreon, is a conversion utility that allows the user to swap among various texture compression and file formats. It can also generate and remove mipmaps. 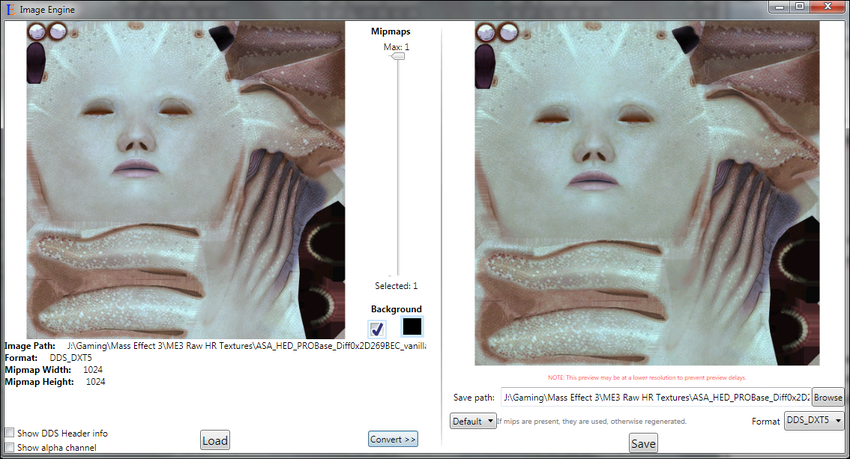 SirCxyrtyx's Interp Viewer serves the same purpose as the Camera Tool, but in a much more sophisticated graphical interface. Similar to UDK's Matinee Editor, all tracks associated with an Interpdata are displayed on a timeline, with their associated properties displayed in a bottom pane. 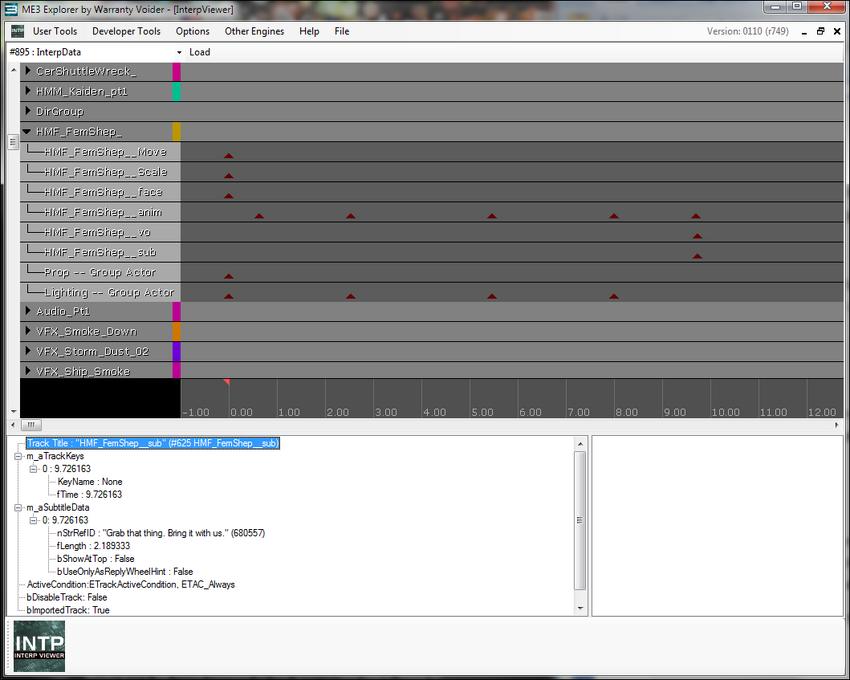 ModMaker's interface is much more graphical, and .mod creation -- which was inadvertently stripped out after the last stable -- has been returned. ModMaker should now *only* be used to install or extract assets from .mod files. It should not be used for texture installation, and TPFs are no longer loadable. Read more about how to use .mod files in combination with DLC mods in the ModMaker article.

Texplorer is considerably more user-friendly, with each game texture now having a real thumbnail. The 3 versions for each game are now united into the same tool. Texplorer no longer extracts DLC in preparation for treebuilding; instead this process is now initiated upon first opening the toolset.

TPF Tools, like Texplorer now has thumbnails and is more graphical. It also is compatible with a wide variety of image formats, able to utilize much more than just TPFs and METPFs. Installation works for all 3 games, and all the past issues with ResIL.dll have been remedied.

There are a variety of procedural changes that accompany this stable. All are (or will be) covered in the relevant tool articles, but the most important ones are summarized below.

With the move to Nexusmods and GitHub, methods of updating the toolset have changed. There is no longer a tool built into ME3Explorer to assist in updates. Instead, Beta releases are downloaded manually from Git, and stable releases from Nexusmods.

Also, with the move to Git and change in versioning and workflow, "Download the latest rev" is no longer the motto to live by. Average users should stick to the mostly bug-free stable release on Nexusmods. Only modders and testers should be using the Beta. For more information, see Getting Started.

ModMaker, Texplorer, and TPF Tools all depend upon DLC extraction to work properly with DLC mods. Therefore, DLC extraction now occurs outside these tools and triggered upon opening v2.0 for the first time. There are some important details to understand about this process:

We strongly suggest you allow the extraction. For more information on how the new process works, see Getting Started.

Trees made with the old stable will need to re-built with the new stable; they are incompatible. Sorry, but, you'll need to vanilla.

We also suggest that trees built with revisions older than 748 be re-built, as certain new functionalities in Texplorer seem to prefer this. The good news is that this tool won't be changing again for a long time. Trees created now may last literally years. Possibly forever.

Oh, and by the way, it's now possible to scan a new DLC and add it to the tree... but we'll let you read about that in the Texplorer article :)

We want to be very clear that we make no guarantees of further development on the toolset. The ME3 modding community is small and getting less active; Mass Effect 3 is now four years old. We've also had a lot of staff turnover during the course of the project, and the last two years have been an especially long haul. However, we are still discussing new content, which is a good sign.

If and when we proceed, here's what you might see:

Community content is available under CC-BY-SA unless otherwise noted.
Advertisement